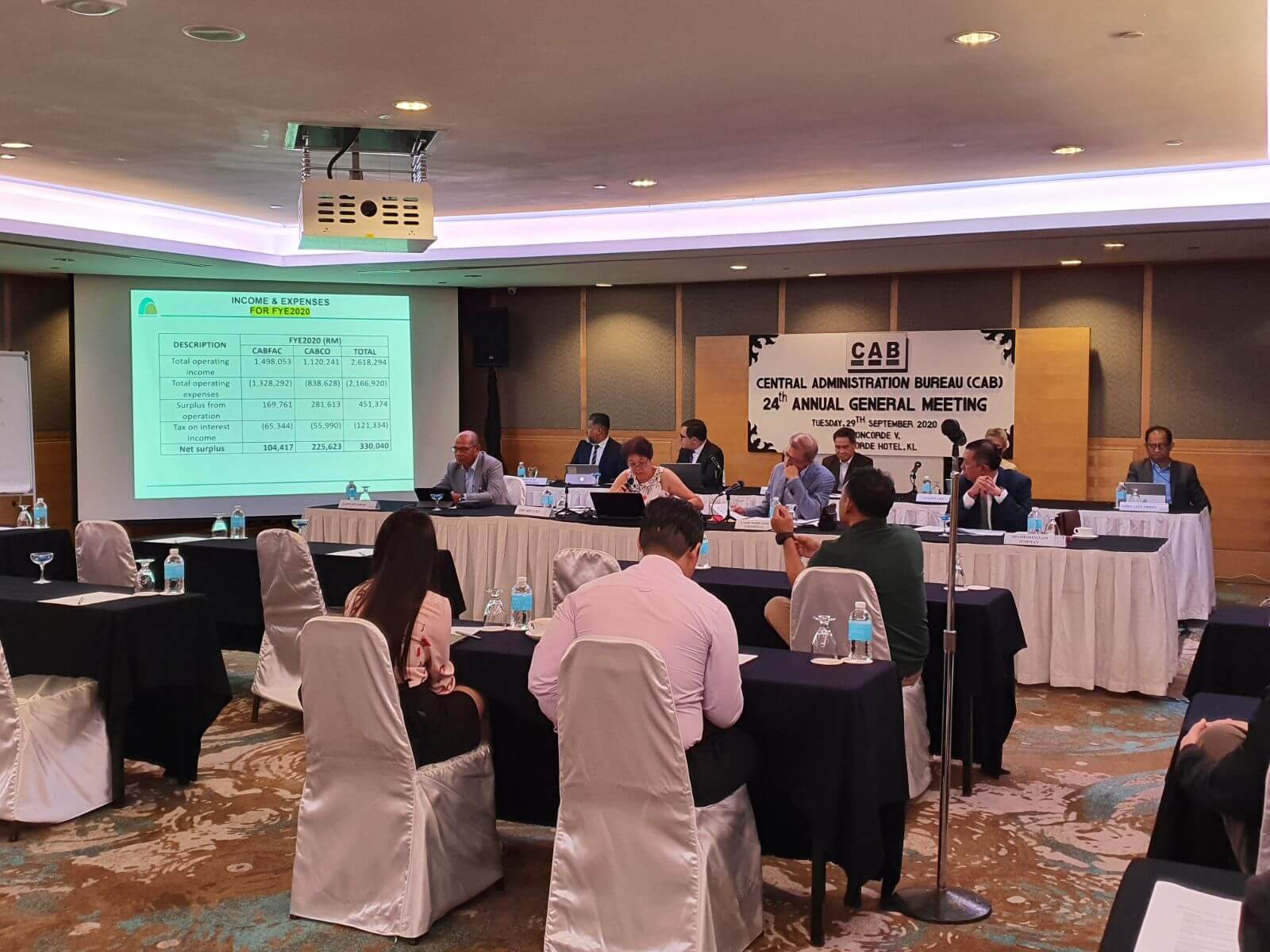 On October 29th, 2020, the Annual General Meeting for the CAB stakeholders has been held at the Concorde Hotel, Kuala Lumpur. The objective of the AGM is to provide the annual report of production through CAB for the year 2019.

Due to the pandemic safety concerns, the AGM was organized into two separate environments – physical attendance and online video conference via Microsoft Teams. All the board members were involved in the physical meeting with other 8 representatives from various CAB members. Meanwhile, 16 stakeholders opted to participate in the meeting via video conference. To ensure the event complies with the Standard of Procedure (SOP) for Covid-19 preventive measures, all the seats were arranged with a distancing measurement, and all participants are required to scan with the MySejahtera app and ensure they are wearing face mask throughout the meeting.

The agendas of the meeting are as below:

The bureau manager reported that as at 31st March 2020, the total current registered CAB members are 43 member which consists of insurance companies, reinsurers, and brokers. In regard to the CAB performance between 1st April 2019 to 31st March 2020, the total volume of transactions has increased by 1.9% compared to last year. However, the volume does not reflect the total premium as there is a declining of 0.6% compared to the same period. The broker business recorded an increase of 60% but decreased by 9.2% in term of the Growth Premium for brokers. The report was accepted with no rejection by the stakeholders.

On 20th May 2020, the Supervisory Board adopted the audited accounts of the Central Administration Bureau for the period ended 31st March 2020 together with the Auditors’ Report thereon. The report was accepted with no rejection by the stakeholders.

As per Article 8.6 (vii) of the Collective Agreement, the Supervisory Board at its meeting held on 28th February 2019 had considered the income of the CAB and budget for the forthcoming year.

The report and proposal were accepted with no rejection by the stakeholders.

The members of Supervisory Board for tenure 2019/20 as below:

As all agendas has been discussed, the meeting opened for Q&A session to all participants including those who watch through video conference.

The meeting then concluded at 12.00 noon as there is no further matter arose.